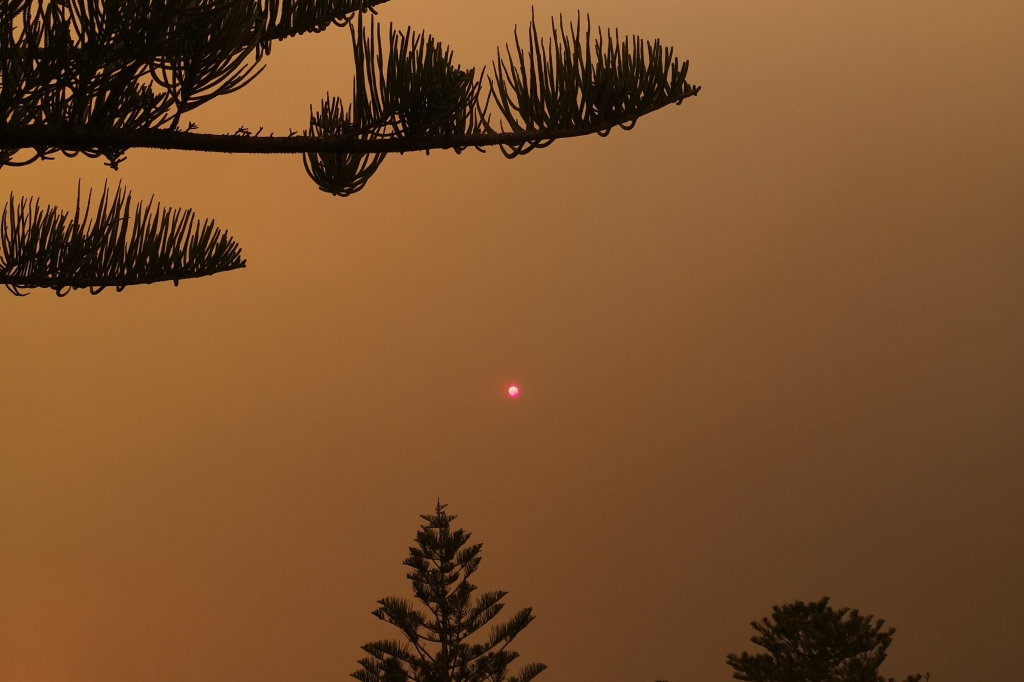 I hadn’t posted the pictures before we left because I thought it would be over.

In a futile act of magical thinking, I told myself they’ll go up when the danger had passed; upload them before that, and it’ll linger. The fire, I mean. You see, I thought I had a say.

It was an outrageous hypothesis, a crumbling bridge between denying my powerlessness and succumbing to it. I held the higher ground of hope for a while. There’s always ridiculous hope before a catastrophe unfolds. Ridiculous, because of the inaction it fuels. It only seems self-contradictory on paper- in reality, it takes an immense amount of energy to just sit by and watch the world as you’ve known it turn to ash.

We went to see the pelican show that day.

I kept looking up at the sky, first through the backseat window, then straight up while waiting by the pool for my husband to change into his swimming trunks, then through my phone screen and then straight up again. On the beach, we passed a class of middle-schoolers taking a first aid class, the waves too strong for them to be allowed to swim. The water was cold. Their hair was wet, still, their knees sandy.

Some played football, others waited patiently for their turn to save the plastic torso from losing a life it had never lived; a few ran around screaming, their teachers calmly standing by, watching. They teach you how to do that in school, yet I’ve never been able to block out the noise. Teachers possess powers you wouldn’t believe.

We dipped our toes in the water, searched for tiny crabs in the rocks revealed at low tide, walked slowly so we won’t slip on the green bits. I kept looking back to check if anyone approached our belongings. Wallets, phones.

By means of geography, I’d been conditioned to fear theft more than the darkening skies ahead. I squinted till the silhouette of the lifeguard came into focus, felt glad to see him towering over us, a figure of authority, watching. Everyone was calm, quiet, pleasant. ‘This is all OK’. I thought all my instincts must be foreign.

I had never seen bush fires before, never seen forest fires either. The closest I’d come to a burning flame of any consequence was when I lit a quarter of the living room on fire, as I hung dry laundry up, in the dark, by the radiator. As a child, I found the stories of Snow White and Cinderella boring on their own and, in play, I somehow found a way to merge the two into a single act of arson. Long story.

This wasn’t anything like the tall, yellow flame that brought my mother screaming out of the kitchen, and burned a dark circle into the carpet; the remains of this wouldn’t be reduced to a cautionary tale laid neatly by the doorstep, a daily reminder, coarse under my feet, of how stupid I had been and how all of this could have been avoided. This felt personal yet wasn’t; this was personal for everyone. There wasn’t a single flame, either- just the common cloud of many.

The haze covered everything.

I found it beautiful at first, and for a long time after; I was drawn by it in the sort of way one is drawn to danger, when you’re far enough from it for it to do any damage. Not a coward’s chronicle, but that of a human and that deeply human feeling, of watch-it-closely, stay-away.

The smoke coming from the fires at first turned the sky into a playground of light and deep and medium orange. Then, brown. You couldn’t take your eyes off it. It was interesting, alluring in its imminence. It was really bad. Damaging, inflicting the sort of harm that our friend must have feared had fallen upon us, a few days before, when we hadn’t gotten home by the time we said we would and he called to see where we were. How we were.

It didn’t sink in at the time that death could have been in the cards for us. We were there when the fires had started in the South. The chances were slim for us to get hurt; there was talk of the blazes being put out with help from overseas, and besides, our friends took good care of us.

I strongly felt that all of this had to be over before it did any more damage; had to, I guess, in the same way our generation has found solace in the consumerist rhetoric, which is adamant that we could have most of the things we want if we think of them hard enough, work hard enough, perhaps hope or pray for hard enough. We seem to project that onto everything else. Whatever it is that we want, it’s ours, and we could get away with pretty much any means we choose to obtain it by.

More recently, we’ve learned to exercise entitlement as an absolute human right, demanding that the planet and its resources be at our beck and call, dismissing the signs of malaise, turning a deaf ear to the calls for help, giving its grievances only enough attention as it is required to claim it got itself into this mess (“It’s cyclical”) through no fault of our own, and it will get itself out of it on its own, too. As it should. Nothing we did, nothing we can do about it.

We intentionally harm our nearest and dearest, with our ignorance and misplaced scorn and wrath, and endanger our very lifeline to save a very ugly, and very old face of humanity. Put a mirror before domestic violence, between the one-on-ones, and the micros suddenly become macros. Neither, however, is a real problem for the streetwise judges and juries of the world, now isn’t it?

Death we always keep in our pocket, yet it is still such a distant concept. Death is what happens to others, most of the time. The elderly, the sick, the frail, the poor, some of the evil. As they dictate the chapters of history that are to ring truer than fact to the young minds of the future, rich country leaders have come up with such fine criteria for who should stay and who should go, don’t you think?

They’ve almost had us fooled that death is the other man’s burden. For them, though, that is a truth well-lived. Faced with danger or accountability, they flee to Hawaii. They invoke their children’s right to a vacation. After all, they don’t know how to put out a fire, hold a hose. They say they prioritise economic growth; they create, amend, repeal laws that threaten, even in the slightest, the resources laying dormant in the dirty underbelly beneath their feet. The seams that feed their pockets. They place those well above the burning canopy, top of the list of good deeds done. Good for them.

They watch the fires on TV and accept them as the will of God. They sleep well at night knowing they’ve prayed, and it stuck like a well-licked stamp on the gates of Eden. God is the rich, white-man’s aid and always does as instructed. God is docile. God never fails to fulfill our illusions, and protects us from an understanding of what is truly before us, of a reality that might hurt enough to require a human, helping hand to fix. God allows to us see what we want to see. A world without reality. That is the kingdom of heaven.

Words circled in my mind like crows over a battlefield; fear tickled the pit of my stomach with the insistence of a trusty friend. We had drinks we didn’t finish. With the pelican show over, small talk had, donations made, all the fish gobbled up, and black tips of feathers now making their way through the deep orange air, we had a speedy lunch; quicker than normal and peppered by far fewer jokes because of the sense of urgency, of something you couldn’t take any shelter from, just distance.

We had to start making our way up the road. I kept stopping, kept looking back and up.’Watch it closely’, ‘Stay a bit’, ‘Go’ There was something primeval about it, the sudden feeling of danger, one you’d never seen or been in before, but that your body knows at once, without the need for experience or explanation. I wondered if others felt it too.

Everyone seemed to remain graciously calm, going about their business, one action, thought and word at a time. It wasn’t indifference or ignorance, it was what you owed yourself, living your life to the best of your means, even when worried, even in the face of danger. Especially in the face of danger. Something this big is out of your hands, anyway. There’s governments you’ve elected to wisely pool resources for that, for help. You trust in that. There’s different kinds of faith going around.

A few minutes into our walk back to the car, we met a chubby dog, skin firm and taut, stretched over its ballooned body, guided forward by a cheerful tail propelling it towards us. We stopped, his parent let us pet her. Told us her name, said she was happy to be loved. He jokingly asked for 10 dollars a pat. We laughed.

The dog enjoyed the attention, we, the distraction. A few more steps up the road, and I stopped again, this time to rub the ash out of my eye. It was gray, cold, and all over. It rushed in a single breath up my nose. Looked back, and up, marveled; shot the pictures.

“We should really get to the car and go now”

The fire burned about twenty kilometres away from where we were, not too far, not close either. I stood there, watching, wanting to fight, not flee. In the usual, absurd fashion. This, it couldn’t be fought because it couldn’t be contained.

We were to find that out a bit later. Yesterday, and today. It’ll be here tomorrow, too. This is real life, it is raw, it is rampant, it rages.